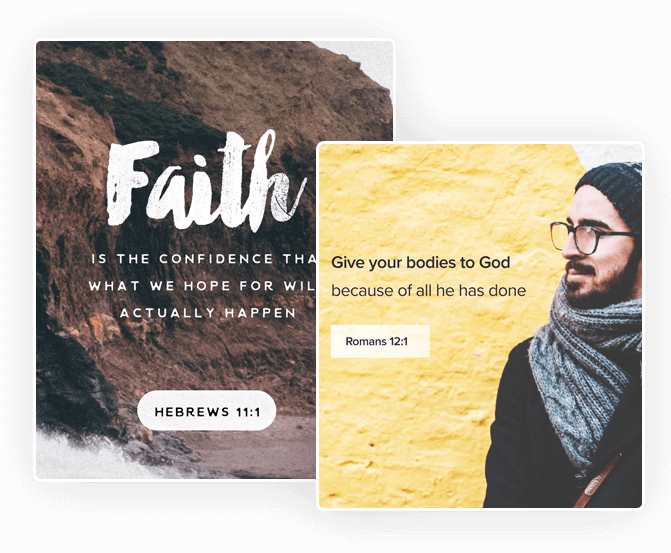 Even as Abraham believed God, and it was accounted to him for righteousness. Know ye therefore that they which are of faith, the same are the children of Abraham. And the scripture, foreseeing that God would justify the heathen through faith, preached before the gospel unto Abraham, saying, In thee shall all nations be blessed. So then they which be of faith are blessed with faithful Abraham.

And his servants came near, and spake unto him, and said, My father, if the prophet had bid thee do some great thing, wouldest thou not have done it? how much rather then, when he saith to thee, Wash, and be clean? Then went he down, and dipped himself seven times in Jordan, according to the saying of the man of God: and his flesh came again like unto the flesh of a little child, and he was clean. And he returned to the man of God, he and all his company, and came, and stoodbefore him: and he said, Behold, now I know that there is no God in all the earth, but in Israel: now therefore, I pray thee, take a blessing of thy servant.

Also I say unto you, Whosoever shall confess me before men, him shall the Son of man also confess before the angels of God: But he that denieth me before men shall be denied before the angels of God. And whosoever shall speak a word against the Son of man, it shall be forgiven him: but unto him that blasphemeth against the Holy Ghost it shall not be forgiven.

But though he had done so many miracles before them, yet they believed not on him:  That the saying of Esaias the prophet might be fulfilled, which he spake,Lord, who hath believed our report? and to whom hath the arm of the Lord been revealed? Therefore they could not believe, because that Esaias said again, He hath blinded their eyes, and hardened their heart; that they should not see with their eyes, nor understand with their heart, and be converted, and I should heal them. These things said Esaias, when he saw his glory, and spake of him.  Nevertheless among the chief rulers also many believed on him; but because of the Pharisees they did not confess him, lest they should be put out of the synagogue: For they loved the praise of men more than the praise of God.

For the wrath of God is revealed from heaven against all ungodliness and unrighteousness of men, who hold the truth in unrighteousness; Because that which may be known of God is manifest in them; for God hath shewed it unto them.  For the invisible things of him from the creation of the world are clearly seen, being understood by the things that are made, even his eternal power and Godhead; so that they are without excuse:

After these things, and the establishment thereof, Sennacherib king of Assyria came, and entered into Judah, and encamped against the fenced cities, and thought to win them for himself. And when Hezekiah saw that Sennacherib was come, and that he was purposed to fight against Jerusalem, He took counsel with his princes and his mighty men to stop the waters of the fountains which were without the city: and they did help him.  So there was gathered much people together, who stopped all the fountains, and the brook that ran through the midst of the land, saying, Why should the kings of Assyria come, and find much water? Also he strengthened himself, and built up all the wall that was broken, and raised it up to the towers, and another wall without, and repaired Millo in the city of David, and made darts and shields in abundance.

And in that day seven women shall take hold of one man, saying, We will eat our own bread, and wear our own apparel: only let us be called by thy name, to take away our reproach. In that day shall the branch of the Lord be beautiful and glorious, and the fruit of the earth shall be excellent and comely for them that are escaped of Israel. And it shall come to pass, that he that is left in Zion, and he that remaineth in Jerusalem, shall be called holy, even every one that is written among the living in Jerusalem:  When the Lord shall have washed away the filth of the daughters of Zion, and shall have purged the blood of Jerusalem from the midst thereof by the spirit of judgment, and by the spirit of burning. And the Lord will create upon every dwelling place of mount Zion, and upon her assemblies, a cloud and smoke by day, and the shining of a flaming fire by night: for upon all the glory shall be a defence.

The word that came to Jeremiah from the Lord saying, Hear ye the words of this covenant, and speak unto the men of Judah, and to the inhabitants of Jerusalem; And say thou unto them, Thus saith the Lord God of Israel; Cursed be the man that obeyeth not the words of this covenant, Which I commanded your fathers in the day that I brought them forth out of the land of Egypt, from the iron furnace, saying, Obey my voice, and do them, according to all which I command you: so shall ye be my people, and I will be your God: That I may perform the oath which I have sworn unto your fathers, to give them a land flowing with milk and honey, as it is this day. Then answered I, and said, So be it, O Lord.

Wherefore laying aside all malice, and all guile, and hypocrisies, and envies, and all evil speakings, As newborn babes, desire the sincere milk of the word, that ye may grow thereby: If so be ye have tasted that the Lord is gracious. To whom coming, as unto a living stone, disallowed indeed of men, but chosen of God, and precious, Ye also, as lively stones, are built up a spiritual house, an holy priesthood, to offer up spiritual sacrifices, acceptable to God by Jesus Christ.

Then he answered and spake unto me, saying, This is the word of the Lord unto Zerubbabel, saying, Not by might, nor by power, but by my spirit, saith the Lord of hosts. Who art thou, O great mountain? before Zerubbabel thou shalt become a plain: and he shall bring forth the headstone thereof with shoutings, crying, Grace, grace unto it.

Because the foolishness of God is wiser than men; and the weakness of God is stronger than men. For ye see your calling, brethren, how that not many wise men after the flesh, not many mighty, not many noble, are called:

Then he said unto them, Go your way, eat the fat, and drink the sweet, and send portions unto them for whom nothing is prepared: for this day is holy unto our Lord: neither be ye sorry; for the joy of the Lord is your strength.

If any man speak, let him speak as the oracles of God; if any man minister, let him do it as of the ability which God giveth: that God in all things may be glorified through Jesus Christ, to whom be praise and dominion for ever and ever. Amen. Beloved, think it not strange concerning the fiery trial which is to try you, as though some strange thing happened unto you:

Seek the Lord and his strength, seek his face continually.

Thus saith the Lord; Cursed be the man that trusteth in man, and maketh flesh his arm, and whose heart departeth from the Lord.

Hast thou not known? hast thou not heard, that the everlasting God, the Lord, the Creator of the ends of the earth, fainteth not, neither is weary? there is no searching of his understanding. He giveth power to the faint; and to them that have no might he increaseth strength.  Even the youths shall faint and be weary, and the young men shall utterly fall: But they that wait upon the Lord shall renew their strength; they shall mount up with wings as eagles; they shall run, and not be weary; and they shall walk, and not faint.

Create your account. It's free and only takes a minute.

In order to earn Prayer Points, you need to have a BibleMinute Account, and install the app via your Android or iPhone device. Would you like to setup an account now?

No Thanks - Install without Prayer Points

Get extra inspirational content as soon as we release it